“Hanging out, down the street. The same old thing, we did last week. Not a thing to do, but talk to you.”

The lyrics are part of the theme song to “That ‘70s Show”, a popular sitcom about a group of friends who are consistently together, enjoying each other’s company. The same can be said about the closeness of the friend group. The show is a metaphor for the relationship between freshman women’s basketball center Sofie Bruintjes and her family living in the Netherlands.

“There’s [a sense of] being together and doing all the fun stuff together and it’s kind of like my family,” Bruintjes said. “I think that’s why we like [That ‘70s Show] so much personally because it’s representative of a good family.”

As they progressed through the seasons, the Bruintjes family added a new member — a black labrador dog whom they named Kelso, after Michael Kelso, a character on the show played by Ashton Kutcher. Bruintjes said he got the name because he is quite clumsy.

Her family loves to laugh, loves to spend time together and is extrealy close. Bruintjes said they are not the typical family — it is just the way she likes it. Best friends living in the same house.

In seven seasons playing the sport, Bruintjes went from wanting nothing to do with basketball to eagerly awaiting the day she put pen to paper and became a Rider Bronc. She had some conversations with other schools in America, but none felt genuine to her.

It was a daunting decision. She knew college basketball was her next step but never wanted to admit it. Her mom, however, knew all along.

“My mom was like ‘You’ve made up your mind, you’re just scared to speak it into existence,’” Bruintjes said.

Her family wanted to make a big celebration about her commitment day and her mom thought it was important for her close friends and family to be in attendance.

“I was like, ‘Just give me the paper, I want to sign,’ and they’re  like, ‘No, we’re going to make a fun day of it on Sunday.’ My family was there and then my mom’s best friend and her family came as well,” Bruintjes said. “So they were all there. It was just a special moment when it was finally happening and what I dreamed about it for years.”

Assistant Coach Steve Harney traveled to the Netherlands in September 2019 and the Bruintjes family welcomed him into their home as if he was family.

“We just had a bunch of fun,” Bruinjtes said. ”He just really clicked with my family so that was nice for me to see that he could get along with my siblings because they’re so important to me.”

Harney said home visits are normally staged in the sense that it is prepared with PowerPoints about the school. He depicted the usual process as boring and monotonous. But his visit to the Netherlands was anything but that. Bruintjes said it was as if he had been there before.

The signing could not happen without getting her mom’s blessing, of course.

They laughed the whole time and had a traditional Dutch dinner called stamppot andijvie. Her dog, Kelso, playfully jumped on Harney, a true sign that he likes someone, but it was really because he was sitting on Kelso’s bone.

“We didn’t really talk much basketball. It was just people being people and just sharing love,” Harney said. “We hung out in the living room and told stories. We knew it was a priority to be in her household.”

Although nobody knew it, from a young age Bruintjes was destined to be a basketball player. There was even a time when she did not want anything to do with basketball. She wanted to be a gymnast like her mom.

But then she grew. And grew. And grew some more. From 5-foot-9 to 6-foot-2 in under a year. It still shocks her because nobody in her immediate family is nearly as tall as her.

“I started growing — growing all the way through elementary [and] middle school. I was just pretty normal height but I was a bit tall but not like right now,” Bruintjes said. “I’m way taller than everybody. At 13, I just started growing so fast. They measured me every week. And every week I grew.”

Being 6-foot-4 is not ideal for being a gymnast. And when it came to basketball, she was not a fan of practicing — an essential part of the game.

Her neighbor back home is a coach for a local men’s team Bruintjes frequently watched and he invited her to come practice.

Her mom was incredibly influential in her basketball career and extremely involved. She texted Bruintjes multiple times after a game asking how it went or what her stats were. She was genuinely interested. Not only about her daughter, but her teammates too.

She would even reach out to other players on the team to see how they were doing. Bruintjes played for the youth national teams in the Netherlands and is on her way to her goal of making the adult national team in the future.

One of six newcomers, Head Coach Lynn Milligan said Bruintjes will have a big role on the team.

“The number one thing for her is to make sure that she’s healthy. She’s doing a lot of stuff right now, this is a good week for her, starting to get back in shape and get on the court a little bit and some non-contact things,” Milligan said. “She’s definitely headed in the right direction.”

A tragedy unlike any other

Esther unfortunately will not see her youngest daughter live out her basketball dream in America.

She died on Jan. 6 to ovarian cancer, which she battled for over four years.

Doctors told the Bruintjes family she only had a few months because the cancer had spread throughout her body.

“We thought it’d be a couple months, is what they told us, and she just was like, ‘Nope, not going to happen,’” Bruintjes said.

When she passed, her phone was flooded with over 200 messages from people she was close with and many who were close to her mom that Bruintjes did not know.

“When she passed away, I got so many messages from people, [saying], ‘Your mom really helped me when I was struggling’ and ‘She reminded me of why I play basketball,’ I was like, ‘Wow, I didn’t even know she talked to all these people. But even in the best moments, she helped a lot of people that I wasn’t even aware of.”

Bruintjes had a special relationship with her. They were inseparable. After she passed, she got the words “Voor Altjud” tattooed on her wrist. It translates to “forever” in Dutch: a phrase her mom wrote on cards.

She said hanging out with the other freshmen on the team helped her cope with the unfathomable loss. The four freshmen took a beach trip to freshman Molly Lynch’s house in Sea Girt, New Jersey.

“We sat at the beach for a while and it was so much fun when we were together,” Bruintjes said. “I was happy to be around a family that reminded me of my own family. That was a really good thing for me. It means a lot to me as well.”

“I would kick her around the corner,” she said. “It’s been such a rewarding thing … my life would be boring without it.”

‘The shot’: Much more than four seconds 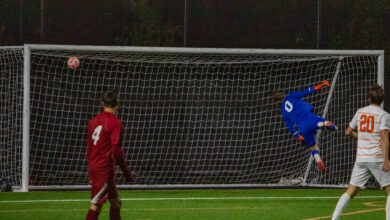