The baseball team faced a tough stretch last week, with a road trip to Delaware, Ohio and Philadelphia.

Rider (4-11) traveled to take on the University of Delaware, Kent State, Ohio State and Lehigh.

In a doubleheader against Delaware (9-6, 2-1 CAA), the Broncs battled hard but dropped both games, 9-8 and 8-6 respectively. Junior outfielder James Locklear had three hits on the day and batted in 4 runs, including Rider’s only hit in the second game.

The first game ended in heartbreaking fashion for Rider, as they took an 8-8 tie into the bottom of the ninth inning. With two outs, an unearned run ended the game in walk-off fashion for the Blue Hens.

Though the Broncs would ultimately fall, they had to put together a nice rally to even give themselves a chance. Trailing 7-4 in the 8th inning, 4 runs on four hits and three Delaware errors gave the Broncs an 8-7 lead.

In the second game, which was shortened because of rain, the Broncs used another inning-long rally to get back in it. In the fourth inning, Rider scored 5 runs on four walks, a hit-batter, and a two-run single by Locklear.

However, the 7-0 hole created by Delaware on a pair of early solo home runs and a five-run third inning was too deep for the Broncs to climb out of.

In the second game, the Broncs took Kent State to 12 innings, where they pulled off a 3-1 win, their only victory of the road trip.

In the top half of the 12th, Lipinski came through with a two-run home run to put the Broncs up for good.

Senior pitcher David Hafer picked up the win, going three innings in relief, striking out five, and allowing no runs.

Hafer believes that although it is nice to record the win, he is just an extension of how his defense plays. “I just try to keep the score where it is and let the guys behind me make plays,” he said. “Our defensive game has been solid through this early part of the season which has kept us in these games. We just need to continue to improve in every aspect of the game and we’ll be where we need to be.”

Senior relief pitcher Eric Thomas pitched a perfect 12th inning and picked up the seventh save of his career.

In the rubber match of the series, the Broncs struggled at the plate and fell 8-5. Rider struck out 13 times.

Senior third baseman Nick Richter reached base four times, however, on two hits and two walks. Last year’s Division I leader in stolen bases would add a steal and a run scored.

Freshman pitcher Nick Margevicius made his third career start and did everything he could to keep Rider in the ballgame. He went five innings and struck out four, while walking one batter.

The offensive woes would continue for the Broncs against Big Ten powerhouse Ohio State (14-6, 2-1 Big 10). In the first game, the Broncs matched the Buckeyes in hits, but fell 6-2.

Senior Mike Parsons contributed to two of Rider’s six hits, including his third double of the season.

Hafer made another relief appearance, going four innings without an earned run. His ERA on the season is still 0.00. Unfortunately, four errors were committed by the Broncs, which hurt them.

In the second meeting, the Broncs would score 2 runs in the first inning on RBI singles by Justin Thomas and Greg Fazio, but slumped for the remainder of the game. The Buckeyes took advantage of the Broncs’ lack of offense and won easily, 7-2. Freshman Paul Sparano started the game, and went five innings.

On Tuesday, the Broncs traveled to Philadelphia for a meeting with Lehigh (3-13). After allowing 4 runs in the first inning, Rider scored 8 in the final three for a 9-4 win.

Already leading 5-4 in the top of the ninth, the Broncs added 4 insurance runs on four hits and a Lehigh error. Richter drove in two with a double, and freshman infielder Jake Bender came through with a two-run single.

Senior Mike Parsons scored three times, including the 100th run of his career.

Senior pitcher Kurt Sowa picked up the win, going seven strong innings while striking out seven. The right-hander is 19-11 for his career, the tenth highest win total in Rider history.

The Broncs will travel to Rutgers on March 25 before they open conference play with a three game series at Siena.

With games against MAAC teams about to start up, Sowa believes his team is working hard to be at the top half of the league.

“We just show up to practice each day and work hard,” Sowa said. “Everyone is staying positive. We know good things are about to come for our team.”

Broncs bested in five sets by Siena and Marist 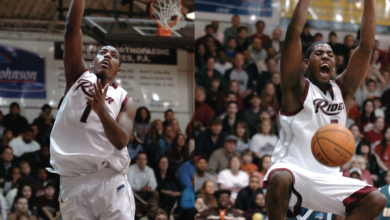