Running is an exercise used by many to stay fit and burn lots of calories. On Oct. 19, running will also be used to raise money for an philanthropic cause.

The fraternity Theta Chi has planned a fun run event, in which participants will register and run a designated course on campus. There are several options depending on the distance one plans to run.

“I’m going to run the longest distance because I love a bigger challenge,” said sophomore TV, film and radio major Rob Brown. “My strategy going into the race is to run it responsibly. I want to win it and I want to run a personal best, but I have to remember it’s a fun run and I’m doing it for a good cause.”

The run will start at 9 a.m., beginning at the Track and Athletic Field.

Participants will pay an entrance fee of $25 to enter the event and take part in the run. This fee includes a T-shirt designed exclusively for the run. The proceeds from the run will be donated to the United Service Organizations (USO). This organization is Theta Chi’s philanthropy.

“The process of setting up this event was challenging, but I enjoyed the challenges because I learned a lot when it came to planning events to support our military veterans and their families,” said senior marketing majoor and philanthropy chair of Theta Chi, Matt Wolf.

The USO is a non-profit organization that is aimed at supporting the families of those who have served in the United States Armed Forces. The USO has offered a large number of programs across the country with the intentions of giving back to those who sacrificed so much.

“I have many members of my family that have served in the military and I have the utmost respect for them,” said Wolf. “To me and to the fraternity, the USO means an opportunity to give back to those who gave the ultimate sacrifice to protect our freedom. Theta Chi has a rich military history that is continued to this day by giving back to the USO,” said Wolf.

This is the very first time that Theta Chi has done a fun run event and the members are very excited to see how it will turn out. This event will conclude a week of smaller events, dubbed “Chi Week”. All of these events serve a similar purpose of raising money for the USO.

On Oct. 15, an event was held in Bart Luedeke Center (BLC) Plaza where students could write letters to soldiers and purchase tickets for the fun run.

Later in the week, on Oct. 18, an event known as “Pie-a-Chi” will take place out front of Dalys, allowing students to pay money in exchange for the opportunity to pie a member of the fraternity. The money acquired from this event will also be donated to the USO.

“I expect Theta Chi to continue with great philanthropy events on campus to bring awareness to the USO,” said Wolf.

Curtains for mainstage productions, but cast bond goes on 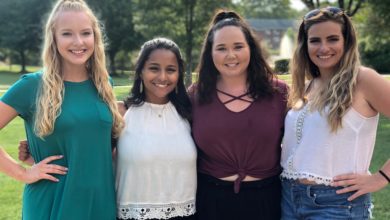 A semester cut short: Seniors speak on how they are affected by COVID-19