Doris DeYoung, longtime English professor and social director of the American Association of University Professors at Rider, passed away on Tuesday.  She was 75.

DeYoung began her career at Rider in the Department of English in 1968 and was esteemed by many students.

“Named by Andrew J. Rider scholars as the professor who had the most profound influence upon their college careers, Doris both engaged her students and was devoted to them,” said a statement from the university.

DeYoung served on departmental committees, assessed freshmen for course placement in the Department of English each summer, and traveled to many places for academic conferences, including Dublin, Berlin and Edinburgh.

Dr. Jane Rosenbaum of the Department of English came to Rider in 1978, and did all of these things alongside DeYoung. She said she remembers her late friend fondly.

“She had, after experiencing a great deal of misery, developed a wonderful sense of humor about it all,” Rosenbaum said.

According to Rosenbaum, DeYoung was diagnosed with polio at the age of 8 and suffered mobility problems for the rest of her life. Eleven months after marrying the Dean of Liberal Arts Harry DeYoung and at the age of 38, DeYoung found herself in the hospital because of serious health problems as her husband was dying of a blood disease in the same hospital.

According to Rosenbaum, DeYoung was slated to return to teach during the fall semester of 2011, despite more health problems. DeYoung suffered from three major seizures just before Thanksgiving in 2009 as the result of several brain tumors.

“It was thought by all, including her doctors, that she would be well enough to return by this fall,” Rosenbaum said. “However dreadful that all is, and there was, I assure you, more even than that, she managed, with the passage of time, to turn the situations surrounding all of these things into a series of hilariously funny stories.”

“She was plain-spoken, but eloquent at the same time,” he said. “She was not only a great professor but a great storyteller, one who had an infinite inventory of stories to tell.”

DeYoung’s funeral has been scheduled for Saturday, according to The Times of Trenton. The viewing will be held from 1-3 p.m., followed by religious services at 3:30 p.m. at the Bongiovi Funeral Home in Raritan, N.J. She is survived by her brother, a nephew and several cousins. 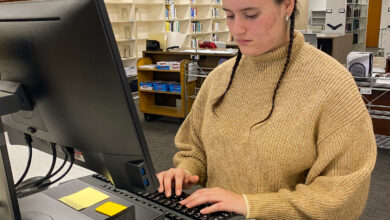