A day after the Broncs defeated Canisius on Jan. 22, Head Coach Tommy Dempsey and his staff announced the four incoming players for next season: Nurideen Lindsey, Derrick Stewart, Shawn Valentine and Khalil Alford.

Dempsey is excited to bring in four fresh faces that can bring something to the program that it may have lacked in the past.

“As a coach you try to recruit a class that will address some needs, some things that you are either losing or some things that your team doesn’t do as well as you would like right now,” Dempsey said. “One thing that all of these guys come in with is that they have reputations as being good defenders. They all have good size. They are all good rebounders. As we try to become a better defensive rebounding team going forward, these guys will all add to that.”

The four recruits are not just limited to their defensive abilities.

“They all have the ability to score the ball, but they come in as young guys with a lot of energy who can rebound and hustle and that is what you need from freshmen.”

Lindsey will be coming to Rider after transferring from St. John’s. In nine games with the Red Storm, Lindsey averaged 11.8 points, 4.9 rebounds and 2.9 assists. Lindsey transferred to be closer to his family since his mother has fallen ill. Original reports speculated that Lindsey would possibly attend Arkansas, but Dempsey was able to convince Lindsey that Rider would be the best fit.

“We brought him up on a visit, so we knew he was interested,” Dempsey said. “He had some offers from some high-major schools, but he was also trying to balance being closer to home and being closer to his family. So that was really the decision that he had to make. We knew if he decided that being close to his family was best, that we would have a shot.”

Lindsey’s talents are anticipated to complement the Broncs on the court. It is expected that he will not see the floor until next season, though. He will have two years of eligibility left after sitting out.

“He is a high-major guard,” Dempsey said. “I think he will bring a lot to the table. It won’t just be scoring. He’s a veteran so it will also be leadership, distributing the ball, defense and rebounding. He can do a little bit of everything, so I think his versatility will be a nice addition.”

Dempsey and the Broncs have not yet attempted to secure a hardship waiver, which would permit Lindsey to play immediately.

“We haven’t started the process yet,” Dempsey said. “We generate the waiver from here and we apply through our compliance director and with Nurideen’s input. We then have to apply to the NCAA for the hardship waiver. That is something that we will work on probably after the season.”

Adding to the tradition of brothers playing for the Broncs, Derrick Stewart will join his brother Danny at Rider.

During their high school years, the brothers formed a formidable duo that led Neumann-Goretti High School to a 30-1 record and the number-two national ranking in 2009.

ESPN Insider describes Stewart as a player who is, “a good athlete who runs the court in transition, elevates in the lane, and finishes in traffic. He has a high-motor and is the type of guy who can infuse energy onto a game when coming off the bench by getting his team garbage points and second possessions.”

Creating a basketball program with a family atmosphere is something that Dempsey prides himself on.

“We have had other brothers here like the Thompsons, the Mansells and now the Stewarts,” Dempsey said. “It is a real close group of guys. I think it will be a lot of fun for Derrick and Danny, and their family as well, to watch them play together. I know both guys seem to be looking forward to it.”

Valentine is another guard that won’t only provide size on the court with his 6’8” frame, but also help the Broncs in rebounding and defense.

ESPN analysts provided the same sentiment as Dempsey, saying that, “Valentine has the length, athleticism, and knack for making difficult plays to make him look very intriguing at times, and while he has a high ceiling he needs to improve his basketball skill set and feel for the game while also strengthening his body. He is an excellent offensive rebounder from the perimeter and gets his team extra possessions.”

Dempsey believes that Valentine will come into his own once he steps onto the Rider campus and into the weight room.

“That will naturally happen as he gets older and gets in the weight room more and just gets in an environment everyday where he will be pushed really hard,” Dempsey said. “I think we end up with the label of ‘raw talent’ on our kids a lot when you’re at a mid-major school. If he were a finished product right now, we would have a hard time getting him. We have taken a lot of kids who have come into the program with that label and have been able to develop them into really good players. I am excited about working with Shawn; I think he will have a good future here.”

The final member joining Dempsey and the Broncs next season is Alford, who is a native of Raleigh, N.C. Alford brings a lot of strength to the Broncs as a guard who is not afraid to mix it up physically to control the ball.

“Khalil is a kid who brings that football toughness,” Dempsey said. “He is physically ready to play Division-I basketball because of his size and toughness.”

ESPN says Alford is a player that, “has very good finishing ability and he is good in open floor situations. Offensively he has a nice stoke and shoots it well from the arc, but it is his mid range and driving ability that are his strengths at the offensive end. He excels at getting out in transition and using his athleticism and strength to finish through contact. He plays with good feel for the game and experience will be key to his development. Defensively he does a good job using his length and foot speed to cover area. In the right league he will be able to defend multiple positions.”

Dempsey expressed that he was happy with the group of players coming into the program next season.

“It is a good mix of guys and it will make practice really competitive,” he said. “That is what you try to do. You try to get as much talent in the locker room that doesn’t have big egos and get along well with their teammates and have a strong work ethic. That is what we strive for in the recruiting process; to identify the type of people who will be successful at Rider, and obviously talent plays a part in that. But there are a lot of different characteristics that we are looking for and I think all the new additions have the competitiveness and the quality of being good people. Those things will just add to our program’s character for years to come.”

R U Talented? Rider’s own X Factor-style competition is underway 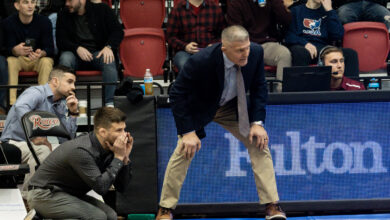