Despite not having the support from Rider’s chapter of the American Association of University Professors (AAUP) the administration is moving forward with an academic prioritization process that the union says will result in major cuts to departments and programs across the university.

In an email sent to the Rider community on Dec. 2, university President Gregory Dell’Omo said an academic prioritization task force has met four times this semester and narrowed down the academic programs that will be reviewed in the process. The task force is expected to complete its work during the spring semester.

“This fall we have begun work on two projects that will help us gather information about how Rider can operate more efficiently and effectively. The first project is an evaluation of our academic programs. Its goal is to help us understand which academic programs are excelling and which ones are contributing less to institutional success,” Dell’Omo wrote in the email.

Brown said, “The intent of academic prioritization is to conduct an internal comparison of our academic programs based upon our mission and strategic plan and to determine how we can better align our limited resources to support that mission. There is no predetermined outcome of the prioritization process. … Through academic prioritization, as well as the concurrent administrative prioritization and efficiency work taking place, we will be more informed about how best to position Rider for success as we face an unfamiliar future.”

Brown did not give specifics but said the process may result in “change” to some academic programs.

The process stems from Rider’s partnership with the national higher education consulting firm Credo that launched in June. Credo is helping facilitate the academic prioritization and an administrative efficiency process at Rider, with the Board of Trustees making final decisions. Brown has previously cited “the complex and multifaceted challenges” the university faces as the reasoning for the partnership.

However, the AAUP claims that academic prioritization is not needed and is only a guise by the administration to cut programs from the university. Earlier this semester, in an email to union members, AAUP leadership condemned the Credo partnership, claiming Credo has a “disturbing pattern of deep cuts of programs and departments, and reduction in student services” and asked members to not engage with the consultant’s representatives. According to Brown, no members of the union have stepped forward to assist in the process.

AAUP President and political science professor Barbara Franz described the prioritization process as “rigged” and a “farce” to find reasoning for program cuts and faculty layoffs.

Franz said, “In his email from Dec. 2, President Dell’Omo stated that prioritization will ‘ultimately demand hard decisions.’ Here, he makes clear that the outcome of prioritization has been predetermined, and that the process of prioritization itself is all window dressing to justify what this administration has always wanted to do: to gut the liberal arts and humanities, lay off faculty and drop programs. ”

Franz continued, “Rider faculty members and support staff have to invest in order to deal with problems created by the administration. Miracles could have been achieved if our world-class faculty were not consistently dealing with these crises … Students ultimately lose out on a number of fronts – paying a premium for a wildly expensive and incompetent administration, an exhausted and frustrated faculty, underfunded and lackluster facilities and the diminished future value of their degrees as the institution falters.”

Instead of faculty participation, Brown said administrators and all four academic deans make up the task force, but they will be asking department chairs to answer qualitative questions related to their programs.

In his university-wide email, Dell’Omo also provided information regarding the administrative efficiency task force, which has met three times this semester. This group is working to, “Review current activities to reduce or expand funding based on strategic priorities and financial concerns, as well as to identify new or improved ways to achieve and maintain acceptable outcomes with fewer resources.” Dell’Omo said this task force’s goal is to have recommendations ready by January 2022.

To close out his email, Dell’Omo said, “I know that the prospect of such change can be scary. But imagine if Rider never changed? Imagine if Rider was trying to compete in today’s marketplace as the institution it was in 1900, 1950 or even 2000? Higher education evolves, and we must evolve with it. That’s what this work is about.” 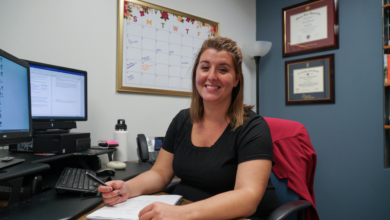