By Katie Zeck and Angela Romansky

Pat Carione is a senior at Delsea Regional High School in Franklinville, N.J. He is currently the Student Government president, a member of the National Honor Society and various service organizations. So far, he’s been admitted to Drexel, Widener and the University of Delaware. He has received scholarships from each school and as a potential engineering major, he feels that attending any of the schools would be beneficial to his future career. Yet, in spite of the schools’ programs, it ultimately comes down to the numbers.

In an attempt to control college costs and provide more information on the value of college and universities, the U.S. Department of Education’s College Affordability and Transparency Center created the interactive College Scorecard website. The site, which went live on Feb. 13, was created by the Department of Education following President Barack Obama’s promise in his State of the Union Address to make information, like student loan repayment data and loan default rates, readily available. The site aims to provide students and their families with relevant information regarding the quality and cost of instruction, the labor market for certain degrees, graduate salaries and average student debt.

“I am just now finding out from the Scorecard how much I would have to pay for school,” Carione said. “Knowing the typical job prospects that each school could give is making it easier to decide if it’s worth the price.”

Jamie O’Hara, vice president of Enrollment Management, said he understands the need for such information, but sees advantages and disadvantages to the scorecard.
“I think that the benefits of the College Scorecard are that it attempts to simplify information that is important to prospective students and their families to consider: net cost for attending an institution, graduation rates and borrowing trends,” O’Hara said. “The question of cost is certainly one of the most important factors for prospective families to consider.”

However, O’Hara said the Scorecard doesn’t account for other factors, such as the amount of financial aid Rider and other private colleges provide as a way to make the cost of attendance something more realistic and affordable.

“If a prospective student shows financial need, he or she may qualify for the maximum amount of state and federal funds that will help offset the cost of attendance more than the average shown on the Scorecard website,” O’Hara said. “We never want a student to think that Rider is not affordable; we work with families to make sure that they can afford a Rider education.”

At whitehouse.gov’s College Scorecard website, searches can be done by typing in a specific college or by the following search options: location (ZIP code, region, state), area of interest (degree and major, awards offered, occupation)and type of college (campus setting, distance education, size). Each school has its own Scorecard that reveals the cost of the institution, its graduation rate, loan-default rate and median borrowing rate.
According to the College Scorecard site, Rider costs an average of $28,914 per year after grants and scholarships, and has a graduation rate of 63.4%, which is considered moderately high. Also, 7.4% of Rider students with federal student loans defaulted within three years of entering repayment. This means that these students were not able to pay their loans (which average $265 per month) on time and as a result may have bad credit and pay high interest rates.

Echoing O’Hara’s comment, many students say they chose Rider over other New Jersey schools because Rider is generous with scholarship money.

“I got the most scholarship from Rider,” said senior political science major Keenan Bailey. “It wasn’t my first choice, but between the financial aid package and scholarship, I changed my mind.”

Students also are choosing Rider over other New Jersey schools because of the campus environment.

“I was between Rider and Rowan University, but Rider won my heart,” said sophomore public relations major Giuliana Morgillio. “Rowan’s campus was too industrial-feeling. I loved how when you came to Rider’s campus you got a feeling of home right away. I ended up loving Rider so much that I didn’t even bother to apply to Rowan or anywhere else.”

Rowan has an average cost of $15,518 per year, but has a surprisingly high loan-default rate at 5.6%. So, although it is about $13,000 cheaper than Rider, the loan default rate is only 1.8 percentage points lower.

Rowan cross-enrolls with Rider. A cross-enrolled school is an institution that admits the same students who are admitted to Rider.

Another school that cross-enrolls with Rider is Montclair State University.

Montclair costs an average of $12,007 per year after scholarships and has a graduation rate of 62.3%. Approximately 6.2% of borrowers defaulted on their federal student loans within three years of beginning repayment for Montclair.

Both Rowan and Montclair are state schools.

Monmouth University is also a cross-enrolled school which, like Rider, is a private institution. Monmouth’s average cost per year is $25,167. The graduation rate is at 66.3% and the loan default rate falls in at 4.6%.

Despite its assistance to high school students like Carione, many, including O’Hara, have found flaws in the Scorecard’s methodology and presentation of the information.
“An example of [a flaw] is the way that the net cost of attendance is reported,” O’Hara said. “The Scorecard uses the overall cost of attendance for a student which includes tuition, fees, room, board and living expenses. The best approach would be a comparison of net tuition and fees at different institutions. The net cost of attendance for Rider is skewed higher in the results when comparing us to other colleges who have fewer residential students.”

In addition to distorted attendance costs, O’Hara is also concerned that people will only see the net price of Rider and miss the amount of fiancial aid that Rider offers. He added that the Scorecard uses data that is two years old. These numbers do not represent the increase in financial aid Rider has implemented over the past years. According to O’Hara, the university plans to increase financial aid again next year.

“Rider’s total institutional financial aid for next year will be $54.1 million, which is a growth of approximately $11 million — a 26% increase over the institutional financial aid funded in the 2010-2011 academic year that is reported in the Scorecard,” O’Hara said. “This will significantly increase Rider’s affordability and adjust its net price position among its peers.”

In a The New York Times article “Scorecard for Colleges Needs Work, Experts Say,” writer Richard Pérez-Peña finds that in addition to its outdated information, the Scorecard fails to provide an accurate comparison of the colleges and universities.
“The information is presented as averages and medians that might have little relevance to individual families,” Pérez-Peña writes. “The Scorecard does connect to each institution’s net price calculator, which allows individualized cost estimates, but it does not provide side-by-side comparisons of multiple schools, as other government sites do.”
Pérez-Peña also notes that one of the site’s most-anticipated features does not exist yet. This element of the Scorecard would show where graduates are employed and how much money they are making.

“The Scorecard simply says that the Department of Education is working on it, and experts say it would probably require a change in federal law to put it into effect,” he writes. “The 2008 Higher Education Opportunity Act prohibits the government from keeping the kind of information that would be needed — tracking millions of people’s educational backgrounds.”

In a The New York Times letter to the editor, Harvard University President Drew Gilpin Faust criticizes the Scorecard by making the argument that the value of a college should not be judged by the earnings of its graduates, but by the way the college prepares its students for “a lifetime of citizenship, opportunity, growth and change.”

“Making college more affordable for students and families is a fundamental goal that we in higher education are dedicated to support,” Faust said. “When we decide what to measure, we signal what counts. Equating the value of education with the size of a first paycheck badly distorts broader principles and commitments essential to our society and our future.”

As the current principal of Delsea Regional Middle School and former head of the guidance department at Delsea Regional High School, Margaret Delia feels that the Scorecard and the information it provides are necessary for the college decision process.
“With regard to the average debt, graduation rates and job prospects information that can be accessed when utilizing the College Scorecard, I truly believe that selecting a college must be a business decision given today’s economy, and such information should be considered prior to a student’s finalizing such a decision,” Delia said. “Although I agree that the student’s primary focus should be on obtaining a quality education at an institution of higher learning, one must also take into account the average amount of loans and the monthly payment amount that will be expected to be repaid beginning within a few months after graduation.”

O’Hara’s concerns with the site are similar to those of Delia.

“If such a resource is going to be offered, the information must be continually updated in an effort to provide pertinent information and increase the number of users,” O’Hara said.

Even with its faults, the College Scorecard site is up and running, and Rider has taken steps to address the question of whether or not its value is worth its cost.

“Rider has prepared a response to questions regarding recent Rider graduates outcomes and their success rate in entering the professions after they graduate,” O’Hara said. “Two weeks ago, the university launched a microsite: ‘Outcomes of a Rider Education.’ This area on our website is a central location for prospective and current students to see where our students intern and study abroad, as well as the jobs and graduate schools they choose after they leave Rider.”

O’Hara said he feels that it is important to be transparent about the cost of a private education.

“I think most colleges and universities are like Rider and do whatever they can to keep costs down and be affordable,” he said. “However, the cost in delivering a quality education continues to increase. The majority of the rising operating costs at a university are due to increases in the financial aid budget that offset the sticker-tuition price. Other rising costs are associated with maintaining small classes taught by first-class faculty, offering strong student support programs, assuring that you have a caring experienced staff and quality facilities. With this in mind, we are still committed to delivering a high quality education in a cost-efficient and affordable way.”

Murray’s return, near triple-double not enough to save Rider against Canisius 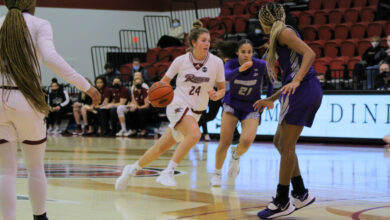