The Rider Club Ice Hockey program has always referred to their team as “The Brotherhood.” A program based on family, friends and the love for the game of hockey, the tight-knit closeness of the group has always been the shining light of Rider Ice. For 22-year-old Tyler and 20-year-old Trevor Giwerowski, “The Brotherhood” is more than just a saying; the two biological brothers from Bensalem, Pennsylvania, are now able to play one season together, wearing the same jersey, for their now shared university.

Currently, Tyler Giwerowski, a senior right-winger, was honored with the captain’s “C” on his jersey for the 2021-2022 season. Through 16 games this season, he has recorded three goals and seven assists for a total of 10 points. Trevor Giwerowski, a freshman goaltender, has a personal record of 8-1-0, with a save percentage of .924, goals allowed average of 2.03 and three shutouts.

Growing up in a hockey family, Tyler Giwerowski began playing ice hockey at the age of 4-years-old, with his little brother Trevor Giwerowski following in his footsteps at the age of 5. The boys were able to play on the same team multiple times in their youth hockey careers; at the age of 6 and 7, they played for the Bristol Blazers youth hockey club together and for Archbishop Ryan in their high school careers.

Tyler Giwerowski also played individually for teams such as the Warwick Wildcats and found himself on the Rider Broncs in the fall of 2018. Trevor Giwerowski was on a different path after high school, moving away from home at the age of 15 to play junior hockey in the Midwest for six years.

“I grew up playing in Pennsauken, New Jersey for Team Comcast until I was 14 and then I made the jump out to West Chester, Pennsylvania to play for the Junior Flyers. I spent one year there before being recruited to play for South Kent Selects Academy, a boarding school up in Connecticut. I spent my sophomore, junior and senior years up there. From there I was in Des Moines, Iowa for a year playing for the Des Moines Buccaneers. After that year I started the next year in Odessa, Texas with the Odessa Jackalopes. After those two months, I finished the rest of the year in Charleston South Carolina with the Charleston Colonials,” said Trevor Giwerowski.

After having spent so much time apart, Trevor Giwerowski’s decision to commit to Rider was an emotional day for the family, especially his big brother.

“The day I found out that Trevor decided to commit to Rider was full of many emotions,” said Tyler Giwerowski. “Trevor had been away from home since he was 15 years old and I missed a big chunk of his teenage years. This is basically my last year of playing hockey and there is nothing better than ending it with my brother by my side.”

Their parents, Heather and Doug Giwerowski, have played a huge role in the brothers’ hockey careers. Driving to the early practices, away games, and their dad even served as part of the coaching staff on some of their teams, it is clear that hockey runs in the Giwerowski family. Heather Giwerowski couldn’t help but get emotional the first time she saw her sons on the same rink, in Rider uniforms.

“The first game they were on the ice together was a very emotional and extremely proud moment for us. Six years have passed since they wore the same jersey. To see them on the ice, on the same team, in the same jerseys was definitely a sight for sore eyes. And it has been the same feeling every game since,” Heather Giwerowski said.

Their success as players and brothers have greatly contributed to Rider Ice Hockey’s impressive 14-1-1 start this season. The team has put up impressive numbers against all of their opponents, most notably completing the regular-season sweep against their largest rival, Rowan University. Trevor Giwerowski had both wins against Rowan between the pipes. Head Coach Sean Levin noted that the boys’ dedication to hockey and leadership skills has helped them win in various ways.

“Tyler is engulfed in the hockey community, he is always absorbing hockey. He will block shots and do whatever he can to help the team, he is the shutdown defensive forward,” Levin said. “Trevor has the same “I got your back” mentality with a save, and he doesn’t need the accolades every time.”

Both brothers are well-respected and well-loved throughout the Rider  hockey community and within the locker room. Teammates and friends had nothing but rave reviews about their playing style, personalities and Tyler Giwerowski’s captaincy. Sophomore forward CJ Perkins captured the essence of both players, from a teammate and friend point-of-view.

Perkins said, “Tyler and Trevor have always been close as brothers and players. They build off each other and make each other better whether it is on or off the ice. Tyler and Trevor are hardworking, down-to-earth and emotional players that want the best for everyone. They both stand out in their own unique way whether it is their game, mentality or leadership. Tyler is hardworking, straight up, and one of the best leaders anyone could have on their team. Trevor is also hardworking, straight up, and a great leader but a little more on the quiet side.”

Looking forward, the Giwerowski’s offered advice to each other in regards to their hockey careers and lives as a whole. When asked to advise his younger brother, Tyler Giwerowski said, “To not take anything for granted while playing for Rider, as this is a brotherhood that you will have for the rest of your life.”

As for Trevor Giwerowski, he hopes his brother will “just always keep pushing forward. [Tyler] has a bright future ahead in the real world and I know he can be a real successful person when he’s striving.”

However, their mom offered a great piece of advice for both of her sons, one she hopes they take with her wherever they go, both on and off the ice.

“We hope that each of them know that no matter where life takes them, their brother will always have their back and be there for them,” Heather Giwerowski said. “Family is everything. We tell the boys all of the time to ‘enjoy the moment.’”

The Giwerowski brothers and the rest of the Rider Broncs will be back on home ice on Jan. 15 versus William Paterson. Before heading back to Lawrenceville, Rider will travel to Virginia to take on Liberty University on Dec. 10 and 11. 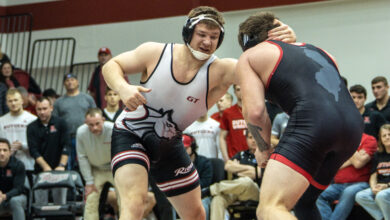