Four Rider alumni shared the stage for the national tour of “Once” the musical.

Gerhard and Lotz had the opportunity to play the leading protagonists, Guy and Girl. The two are no strangers to the spotlight, as they have been performers for the majority of their lives.

Lotz’s love of music started at just five years old when she began playing the piano. Her passion continued to grow as she transitioned into the college level which led her to Rider University’s fine and performing arts program.

Gerhard began his musical career in eighth grade when he picked up a guitar.

“What really got me into it was in 10th grade, I went through a breakup and my dad gave me a Bob Dylan album. I started playing guitar and harmonica and writing my own songs,” Gerhard said.

“Once” is a vocally demanding show for both of these young actors, however their training from Rider is what prepared them for these roles.

“Rider was the best, I really did love it,” Gerhard said.

He had an action-packed four years between performing in mainstages, playing for cabarets and student-run productions and taking multiple performance classes.

“It was a really intense schedule divided between so many different methods of training, I’d say that did it,” Gerhard said.

Lotz gave credit to Carolann Page, Rebecca Simon and Meade Andrews for teaching her how to speak and use her voice in a sustainable way.

“Me and Jack, we have to be mindful about vocal health and using our instrument in a good, safe way, and I think Rider really prepared me to be able to do that,” Lotz said.

Having a familiar face, or three, made the process a lot less stressful for these Rider alumni.

“It’s lovely. It made me less nervous going into the project. It was really nice to know that I had at least three friends, so it made it less scary,” Lotz said. “It’s a really intimate show so you have to be really vulnerable with your scene partner and it was really nice to already have that safety and familiarity already.”

“Our director would joke about it too, he said, ‘alright guys, so now is when we take all of the things that we learned at theater school, which would be Rider University for most of us,’ just poking fun at it,” Gerhard said.

Lotz and Gerhard both discovered “Once” the musical when they were in high school and formed an immediate attachment to it. The unique folk music and intricate storyline quickly captured their hearts.

“This musical has given me the opportunity to travel the country. Playing meaningful folk music on a guitar is a dream come true. The music is really special and it connects a whole lot of people,” Gerhard said.

In their profession, it is not uncommon to be emotionally affected by the show an actor or actress is performing and the character they are portraying.

“There were some times where I just felt drained and it’s a lot more difficult to get there the next day because I’ve worn out my energy. Mental health wise, I’ve really had to make sure that I’m taking care of myself, especially with a show that is this emotional,” Lotz said.

Going on tour is an extensive process that involves hours of hard work and concentration. While it can be difficult to persist through some of these challenges, these actors are rewarded with the audience’s response each show.

“At the end of the show, when I look out over the audience and I’m playing “Falling Slowly” for the last time and I see people crying or hugging their kids and loved ones, that’s my favorite part,” Gerhard said.

“Once” is a show that has the ability to significantly impact its audience members. Gerhard and Lotz have their own interpretation of how they hope the show will affect others.

“Two things come to mind. One is simply the power of music and having some sort of artistic expression in your life. Also, the importance of love and opening yourself up to new people and experiences. Even if a relationship is short lived, it doesn’t mean that you don’t take away something or learn something from it,” Lotz said.

Gerhard said, “When people see this show, I hope it inspires them to overcome any barrier that’s been standing in the way of something they want. This show doesn’t have a perfect ending, but it sets people on their way to be free and happy.” 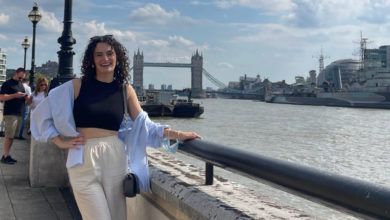 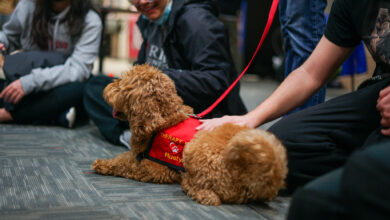 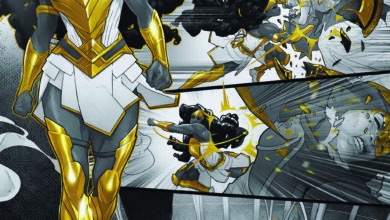