Yesterday, the Broncs were matched up in a back and forth game with the Peahens at home.

Rider built a quick 7-2 lead and ran into some trouble when the game was tied at 16 a piece. Rider then regained the lead and did not fall behind again the rest of the match to preserve the victory.

In game four, the Broncs fell behind 5-1 early. The Broncs fought back and were able to take the lead for good after being down 21-20.

The Broncs scored three straight points courtesy of a kill by freshman Tara Nadasky, a service ace by freshman Amanda Piccolini, and a kill by Johnson. The Peahens were unable to recover at that point as Rider won the match 30-27 and forced a game five.

Nadasky led the Broncs with five kills. Thompson had four kills in the match, Hayes had three, and Johnson had two of her own.

In game five, the Broncs came up short as St. Peter’s took the game 15-13. The Broncs were able to tie the score at 13-13, but St. Peter’s scored two points on back-to-back kills by freshman Monique Flores.

Rider finished the game with more digs (136-123) and a higher attack percentage than the Peahens.
Johnson had 12 kills and 27 digs for the Broncs. Thompson had 15 kills and 31 digs, and Hayes had 19 kills to go with nine digs.

“It is a tough start, but we are working harder everyday to get better,” said Assistant Coach Michelle Walsh.

According to Walsh the team is watching game film to analyze plays and dissect where the game went wrong.
Standout performances against Fairfield were by Piccolini with 17 assists and 8 digs, Elyse Grassmuck had 13 assists, and sophomore Brittany Hayes finished off with 11 kills. Johnson was right behind her with 10 kills.
Sophomore Amy Chapla, about Fairfield, says they are a very good team. The Stags are in fact the three-time regular season defending champion.

“We need to come out ready for the game,” sophomore Lacy Johnson says. “We need to hustle through the whole match, and push through the entire game.”

Rider will try to turn things around when they travel to New Rochelle, N.Y. for their next MAAC game against the Iona Gaels tomorrow at 2 p.m. 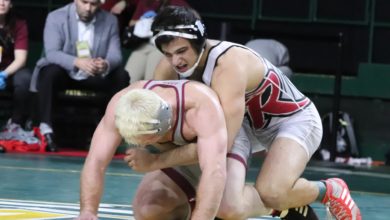